4 Tips to Promote your Tournament

The Free-for-All Simple Stage was the first step towards complex FFA structures, and there are now two of them, that work pretty much the same:

When creating one of these new stages, you will need to fill up quite a few values to determine the size of the stage, of its matches and how many participants will advance from a round to the next: 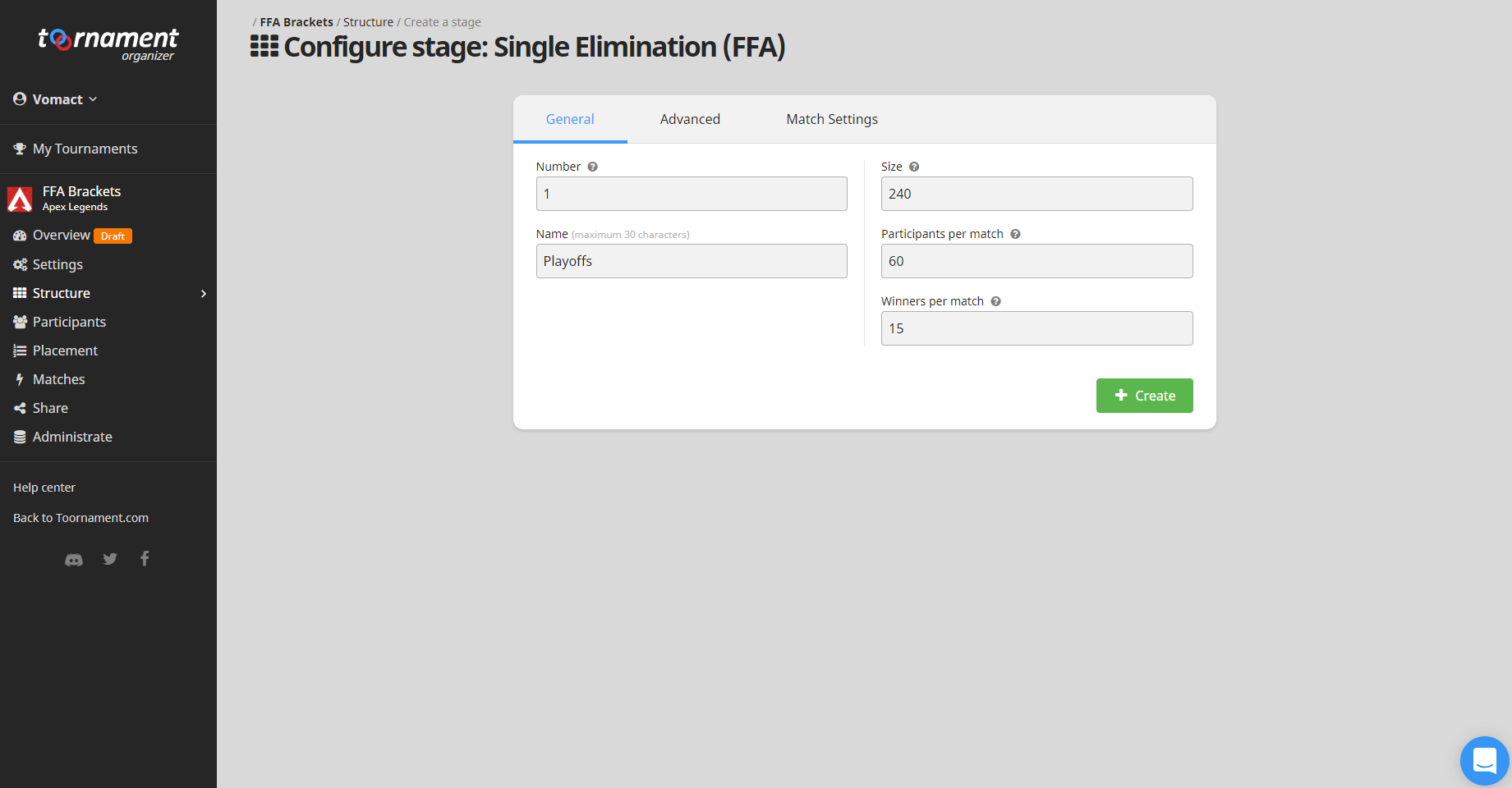 To start, it is important to note that the values you set are used to build the bracket starting from the final match, with the number of winners and the total size of the stage strictly respected, but the number of participants in a match may vary in the first round.

For Duel brackets, the size of the stage has to be a power of 2 (2, 4, 8, 16, 32 etc.) if you want your bracket to be even with standard rounds. The same logic applies to the FFA Brackets, with a twist, in that you may decide to qualify more than 1 participant per round. The formula is:

So for example, if we go with matches with 3 participants, and 1 winner per match, standard rounds will have: 3, 9, 27, 81 participants, as per the formula with various values of R:

Any different total size will create an uneven first round in the bracket, to fall back on one of the standard values.

You can also set a Threshold value under the Advanced tab of the structure configuration, to remove matches in case you want to truncate the structure and not play it until the finals.

Just like the Simple FFA Stage, these new structures are tailored to work with Battle Royale, Racing, Brawlers games etc. and as such, are best paired with the Fixed Sets (Advanced) match format, that will let you configure your Free-for-All matches as you see fit, to have match rankings and players advancing depending on their ranks.

We have seen how to calculate the standard round sizes for FFA brackets, and now, let's see what will happen if you do not use one of these. For example, let's say you use these values:

If you set a Stage Size that does not follow the round size formula, you will find yourself with a non-standard first round, with a simple rule that makes it so that a match only exists when it has (Winners + 1) participants or more (if a match has as many winners as there are participants in it, then the match is not played, and participants in it receive a Bye for the next round).
The size you set can be considered either above or below a standard value, following this logic:

The Break Point is calculated by factoring the number of matches that the round should contain and the minimum number of participants in a match, with the following formula:

Size is above a standard value

Example: size of 12 (which is more than the standard value 9).
In this case, just like what happens in Duel Brackets, a smaller first round will be created where only a few participants will play, to eliminate the supernumerary ones, and have a standard value of participants, to build the next round. You will have to place participants in two separate rounds (the blue dots): 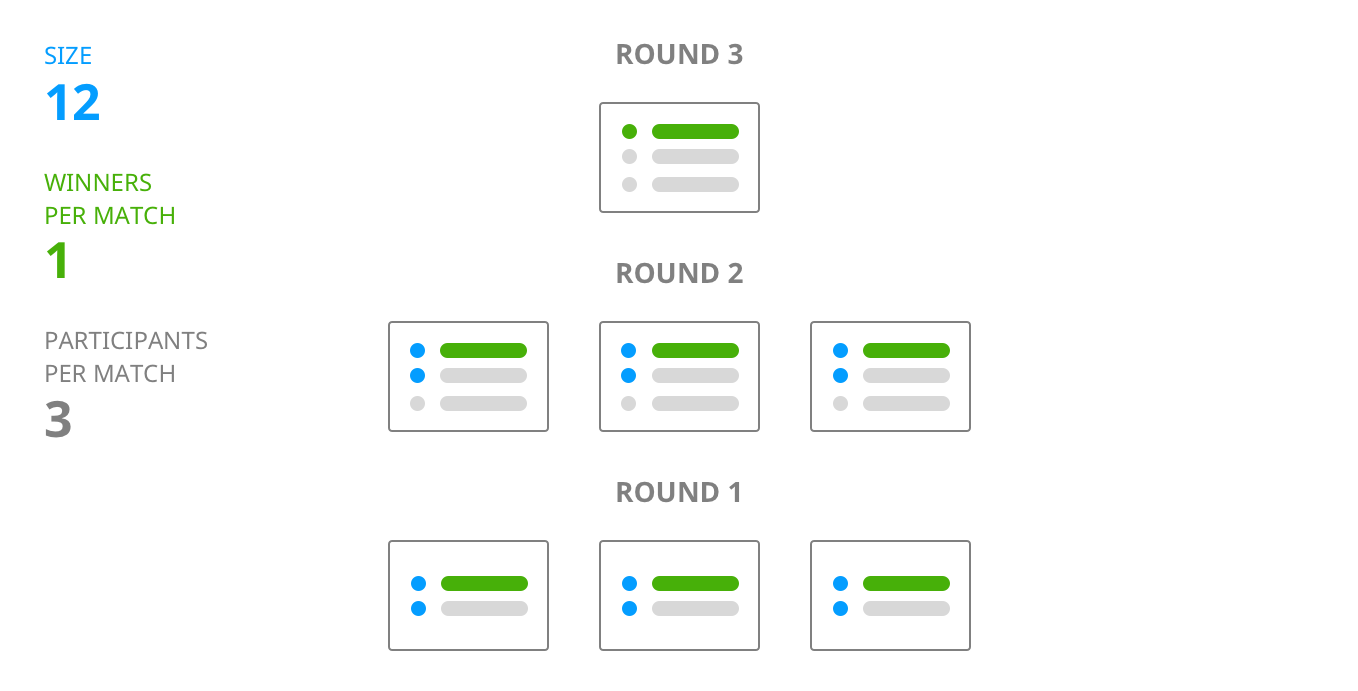 Size is below a standard value 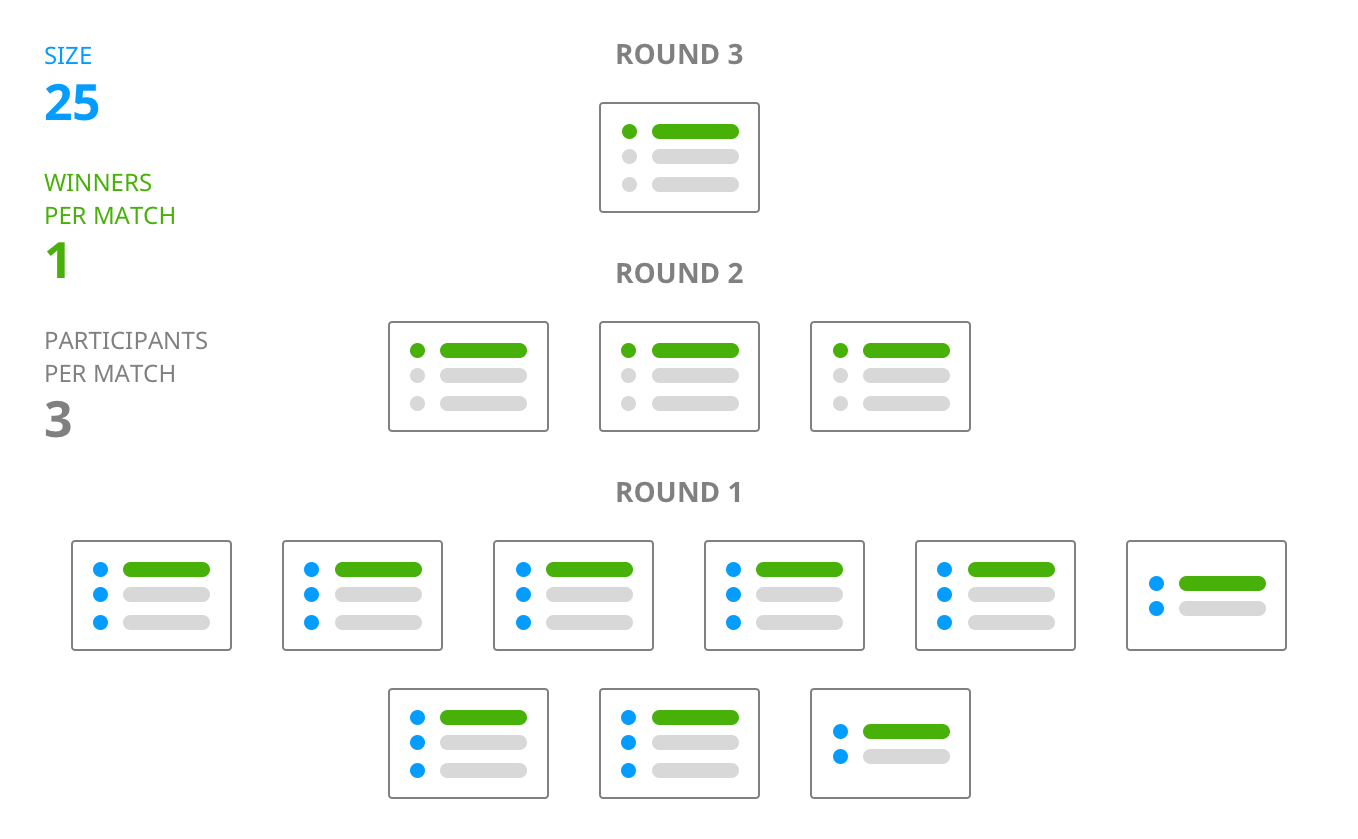